This year, one of my resolutions is to read at least one book every month. I have blown that goal out of the water so far! I re-started my Audible subscription to help me get a jump on things, and I have to say: I have missed audio-books so much! In January, I jumped into some historical literature and some fun mythology/fantasy. This month, I tailored my reads a bit: I completed the fantasy series I started last month and read a memoir recommended by Bill Gates. I don’t really have a “type” of book – I’m kind of all over the place. Life’s more fun that way!

My February 2019 Reads and Reviews 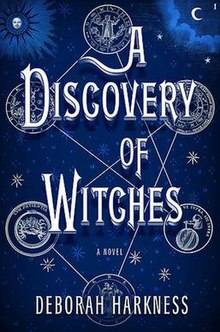 The All Souls Trilogy by Deborah Harkness

I’m not going to break this one up by book, because I already reviewed the first one last month, and I don’t believe in giving out spoilers. Will I read spoilers? Yes. But I’m not giving them away! I’m going to review the overall trilogy for you instead!

This series has 3 books in total, but it also has some companion books to give more detail to things, and now it has a TV show that I watched on Sundance Now – long story, short, I watched the show first, fell in love with it, then went back and read all the books in about a week and a half.

I say read, but I listened, I don’t want to lie to you. The audio-book performance was phenomenal – Jennifer Ikeda performed each character with a different voice, and even though I expected it to annoy me. It didn’t. Instead, it made it so easy to follow what was happening in the story.

Back to the review. I really enjoyed the story line. I tend to be one of those readers who doesn’t try to predict the ending of books, movies, or shows because I like to live in the moment with the characters. I’m sure if my fiance was reading along, he would have been able to guess a few of the revelations in the ending (not all – there’s a twist or two!), but I didn’t. This was one of those series that could captivate most audiences – it brought in magic (duh, it’s about witches and vampires), action, romance, history, and even elements of science.

The story centers around a witch who finds a mysteriously hidden book in the Bodleian Library at Oxford. She’s the only one who can access the book and everyone wants it – vampires, daemons, and other witches. The other thing you need to know as that the various creatures don’t trust each other. I know, my summary is vague, but it’s awesome to read about.

The author, Deborah Harkness, teaches collegiate history – she based the story around her own experience finding a lost historical text while researching in the Bodleian Library and what it could have been like if there were magical elements tied to it. I’m not going to lie, I was glued to Wikipedia for a solid 2 hours after finishing the books to learn how much of the history in the books aligned to truth about that mysterious book she found. That, alone, was worth the read, because the story without magic was just as adventurous.

If you like fantasy, this series is for you! Please note that it’s definitely not for children and teens, as it has some sex scenes that are more descriptive than I’d feel comfortable with someone that young reading.

This book caught my attention through Bill Gates’ 5 Books I Loved in 2018 article. If Bill Gates likes it, I’d like it too, right? It also popped up on every Audible recommendation list that came out at the end of the year. This meant, to me, that Bill G and everyone else liked the book. So I downloaded it.

The story follows Tara, the author, through her struggle to dive into the mainstream education system (and society) after growing up off-the-grid with her Mormon, survivalist family in Idaho. She had no birth, medical, or school records until she was about 9 years old, and her family didn’t believe in formal education or modern medicine. She taught herself everything she needed to know to take the ACT, and that allowed her to break away from her life, go to Brigham Young University, and eventually attend Cambridge.

I enjoyed this book – I usually enjoy jumping into the shoes of someone who has a different background or belief system to learn how they see the world. Tara explains why she feels so strongly about things she holds onto: dressing modestly, not working on Sunday, not holding hands with men. For her, some beliefs she held out of fear (of Hell or family rejection), and others she genuinely preferred – these were things you see her struggle with and learn about herself throughout the memoir.

I definitely recommend this book for someone who wants to learn more about Mormon culture or wants to explore their own beliefs – why do you believe what you do? Is it something you believe out of fear, societal pressure, or because it’s what you’ve decided for yourself?

I can’t wait to see what fun March brings!

Book, movie, or show suggestions for me? Let me know in the comments below!

I'm a pretty normal person who likes to do crafts, plan parties, read, and travel. I'm a bit scatter-brained, so this blog is a way for me to organize thoughts and write about all the things I put time into creating.

I also have a cat.